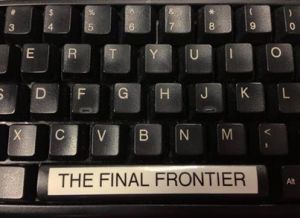 Ok, what does it take to teach an old dog new tricks? I have to ask, see, because I’m old enough to remember the days before computers, before cell phones, before the technology boom in all its glory.  And I have to admit, I am a pretty reluctant consumer, always hesitant to jump on the latest technology bandwagon.

I have my reasons of course.  Reason #1: As I recently admitted (It’s the Bomb), I have an addictive personality. It doesn’t take much, and I’m hooked.

For instance, many years ago now, there was this new mini-oven thing that ‘waved’ your food in less than a minute. I knew I would never want to be without it again, would not be able to imagine my life before it, would give up my full-sized oven before I’d give up this wave-your-food-fast-thing. So of course I resisted getting one. But you know where this is going…. Yes, this food waving thing now permanently resides in our tiny, galley kitchen and so what if does take up a huge portion of counter space? The floor is a perfectly good place to stir, chop, blend, though who cooks real food anymore? Not me!

Same reluctance occurred when the “smart” phone came out – which I finally got, oh, let’s say less than a year ago. Yes, I did without one all this time, watched people texting, taking good photos, reading their email, playing games on their phone, and I was satisfied with my antiquated little Samsung because I know myself. I knew once I had a smart phone, I’d pay any amount of money for its data package, it’s games, all the cool apps I could get. Deposit checks via my phone? Yes, yes, yes!

I may also have been the last writer to give up my trusty Corona typewriter for a desktop PC. One of the last to replace my PC with a laptop, or for that matter, to get a DVD player. Naturally, I haven’t given up my VCR and most of my videotapes. After all, I have some old movies, (e.g. New Leaf) that can’t be easily, or cheaply, replaced.

Which brings me to Reason #2: The cost!

You have to admit if you wait a little while until the popular “new thing” isn’t so popular anymore and until most of the kinks are out, you get a better deal. Ok, I know some of you (like you who willingly stand in line for the latest iPhone the minute it comes out) laugh at this idea. I know it’s unthinkable for you not to buy the newest technological wonder the second it’s released. Smarter, faster, cooler… you have to have it! If this is you, more power to you. But these new toys being as expensive as they are, I have to wonder, where do you get the $$?

See the reluctant consumer part of me always has to ask: why pay for cable when rabbit ears will do? Why pay for a phone that requires an expensive data package when you already have a computer and are paying for internet access? And aren’t DVD’s already passe? I can’t keep up! I don’t want to keep up! It’s going to cost me dearly!

As if it hasn’t already.