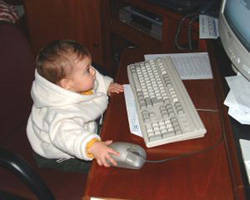 Being human isn’t as easy as it used to be; it now requires gadgetry. Speaking as one who can barely operate a can-opener without risk of dismemberment, I would like to formally protest the ever-escalating onslaught of technological frippery that threatens far more than life, limb or thumb. The very soul of humanity is at risk (inasmuch as catatonic tweeters qualify as humanity). Humankind – or its reasonable facsimile – is on a collision course with electronic lunacy.

In an effort to look busy, The Department of Innovations in Frustration has developed the automated phone system. If you’ve ever felt the life-force drain from your body as you navigate through a series of buttons and recordings, you’ll long for the bygone days of simpler, yet more efficient systems like yodeling or smoke signals. Dropped calls on your cell phone spark nostalgia for the superior reliability of two tin cans joined by a string.

Fast-food intercom systems likewise confound communication. Ordering a bucket of wizened chicken should be a simple matter, yet something always seems to get lost in translation (namely your food). When speaking through those vexing voodoo boxes at the drive-thru, it’s often unclear whether you’ve successfully ordered hot wings or booked passage to the underworld.

Another source of dread is the ticking time-bomb of the computer keyboard: the “Reply All” button. One distracted slip of the fingertip and that scathing critique of your boss’s toupee threatens to render you unemployable.
And then there’s the sinister satellite signal that always seems to be lost during the play of the century (insert favorite sport here), but never during the antacid commercials.

What’s the antidote to these soul-crushing techno-traps? A refresher course in how to be human. Consider making a few subtle changes in your dependence upon technology:

Instead of paying for costly video games that simulate dancing, try dancing. Rhythmic movement of the arms and legs is a primal urge felt by many humans (and orangutans) that requires no formal training (with the exception of suburban males). The only risk involved is catching a glimpse of oneself in a mirror which can lead to self-loathing and isolation.

Rather than e-mailing a co-worker, utilize the power of human speech. Nothing separates man from beast so much as the capacity for verbal communication. Although, five minutes of mind-numbing conversation with your chimp-like office-mate is likely to send you reaching for a blunt object, a major setback to your anger management program.

Abandon the isolation of the exercise treadmill in favor of a brisk walk in the great outdoors. Push from your mind the time you stumbled clumsily into oncoming traffic and escaped certain doom only by falling down a coverless manhole.

Reject the dehumanizing practice of severing a relationship via text message and meet in person, preferably in a social setting like a café. Though risk of flying cutlery and public humiliation loom large, isn’t it worth it to reconnect with humanity?